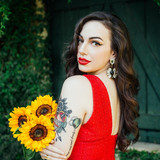 Feli Moschos is an independent singer based in Athens, Greece. In 2014, she received her Bachelor degree on stage directing and acting from the Theatre Department of the School of Fine Arts of the University of Peloponnese. During that time, she studied classical singing with the soprano Anna Maria Karkania Kokkori and the accompany pianist Billio Moraiti. In 2018 she received her Classical Singing Diploma (Grade: Excellency) along with the 2nd prize from The National Conservatory of Athens. Besides opera and musical, Feli also sings other kinds of music (jazz, swing, latin,blues, rock'n'roll, neon soul, pop, electronic, house).

In 2019 Feli's first greek jazz EP was released on digital platforms by the title "Αυτό είναι Swing!" and her digital single "Light Blue" has also been released during the same period. Her first full lenght latin-pop-blues album will be released soon! Until then you are welcome to follow her on social media (Instagram, Tik Tok, Facebook) and subscribe to her YouTube channel.