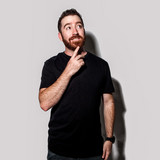 Ryan Riback is a DJ and record producer known for his work across the pop, trap, house, twerk and tropical notions. Born in Johannesburg and calling Melbourne home, Ryan is one of the most in demand remixers due to his enviable way of fusing his pop sensibilities with his preference for melodic, midtempo club infused dance records. He has officially remixed records for artists such as Maroon 5, Kelly Clarkson, Fergie, Julia Michaels, Fifth Harmony, Andy Grammar, LANY and so on. Most notably, Ryan’s certified-platinum remix for debut artist and fellow Australian, Starley, has garnered over 500M+ streams on Spotify, additionally hitting the Top 10 in the UK, Sweden and Germany to name a few, and was recently nominated for an Aria Award for Song of the Year. Within the four walls of the studio, Ryan has taken his melodic and contagious musical style to a higher, sophisticated state landing collabs with Australian and global labels from Kontor Records, Spinnin’, Sweat It Out and Sony to Ultra Records, Ministry of sound, Cloud9 and BMG. In June of 2017 Ryan released his debut single, “One Last Time” featuring some chick which landed on the Aria charts in Australia. In July of 2017 his highly-anticipated collaboration with Burak Yeter, “Go 2.0” was released. Most recently, Ryan returned with, “Do You Care” featuring Swedish singer/songwriter, Iselin. “Do You Care” is a melodic-midtempo, pop driven record that tugs on the heartstrings as much as it has you up and dancing.