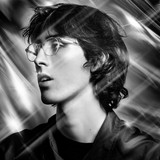 A. G. Cook is best known as the founder and head of PC Music one of the most discussed record labels of recent times, which has been called “one of the most confounding pop-music phenomena to appear in a long time” by Pitchfork, cited as “an on-point vision of the future” by FACT, and as working with “the rapid-fire of a pop factory, the ideology of the avant-garde, and the critical awareness of the best net art” by Dazed & Confused. A. G. Cook has also spent the last few years working in creative partnerships with artists, most notably Charli XCX for whom he was Executive Producer on her projects Number 1 Angel, Pop 2 and new album Charli.