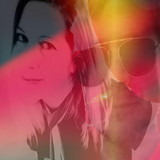 Dead Amps are Erin O’Toole and Jonathan Payne. They met in southern California in 2004, and started playing music together shortly after that. During those first few years, they played lots of venues throughout Los Angeles and Southern California, won a few local music awards, and cut their teeth producing their own music in the first studio they built. As it happens, bands often come to an end, and this one was no exception -- but Jonathan and Erin knew their relationship was just getting started. The foundation for Dead Amps was already laid. They had other musical territory to explore. Jonathan built the next incarnation of their studio and they released their first EP in 2007. The following year, they put out their first full-length album, Reloader, with a handful of songs placing on college and electronic music charts. The track “Storms” was named a Hot Pick by acclaimed UK publication Future Music. After moving to Colorado in 2009, they continued to create and put out a number of releases.

Between 2017 and 2019 they teamed up with UK-based indie label Pink Dolphin Music Ltd. to put out their next releases: EPs Sleeper Haze and Portrait of Our New Storm, and the full-length Modern Garbage. In 2019, Pink Dolphin Music Ltd. put out a tribute to David Bowie’s 1980 classic Scary Monsters (and Super Creeps), with Dead Amps’ distinctive vision of “Fashion” being a highlighted track on the album. On December 11, 2020, they released their fourth full-length, "DA4."