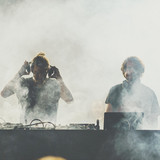 German duo Tube & Berger bring a hefty dose of emotion, as well as a bit of a rock & roll attitude, to the world of tech-house. Initially known for driving, electro-influenced tracks, including "Straight Ahead," their hit collaboration with Chrissie Hynde, the duo gradually moved toward deeper, warmer house, with a preference for melody, vocals, and live instrumentation. The duo co-founded Kittball Records with Juliet Sikora in 2005. Their debut full-length, Introlution, appeared in 2012, and We Are All Stars followed in 2017. Arndt Rörig and Marko Vidovic, two friends from Solingen, Germany, initially started off playing punk rock as teenagers. After discovering dance music via Daft Punk and the Chemical Brothers, they began making music on an old PC running Rebirth. Eventually, they saved up enough money to book studio time in Düsseldorf, but they still had much to learn before they mastered music production and recording. Their first single, the uptempo electro track "Geradeaus," first appeared in 2002. An English-language version, featuring the Pretenders' Chrissie Hynde and re-titled "Straight Ahead," was released in 2003, and became a worldwide hit, topping Billboard's Hot Dance Airplay chart in 2004 (marking Hynde's first-ever song to reach the top spot in any Billboard chart). The duo became overnight stars, but they learned about music industry troubles the hard way, and spent an entire year dealing with label and management issues (as well as upgrading their recording studio) before releasing any more music. In 2005, Tube & Berger co-founded Kittball Records with fellow DJ/producer Juliet Sikora. The label's first release was "My Love," which the duo released under the name Babylon Robots. While that pseudonym proved to be short-lived, Tube & Berger became highly prolific, issuing additional singles on Kittball as well as other labels like Alphabet City (2006's "No Control" and "Buttonpusher" and Opaque Music (2007's "Rock N Roll Queen"). They helped organize Loveparade festivals in Essen (2007) and Dortmund (2008), and began performing around the world more frequently. Tube & Berger released their debut album, Introlution, in 2012. The album included a collaboration with Chicago house legend Robert Owens. They also released the non-album singles "Lovebreak" (featuring Milan Euringer) and "Come On Now (Set It Off)" (with Sikora), both of which charted in Europe. In 2013, EDM superstar Tiësto invited the duo to host a monthly radio show on Sirius XM, titled Tuber & Berger in the Mix. They toured throughout Brazil, South Africa, and Australia, and began extensively touring through North America a few years later. The duo's second album, We Are All Stars, was released by Embassy One in 2017. "E Samba 2018," a collaboration with Junior Jack, followed on Kittball in 2018. ~ Paul Simpson, Rovi