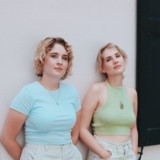 Mother Lion was birthed in January 2021 by sisters Vanessa and Faith. After pursuing their own individual careers, they both came to the conclusion that it would just be better together.   The sisters wasted no time in making music, and their first six months as a team was spent releasing a new song every week, with each song being made completely in house. All songs were written, produced, recorded, and mixed from their basement studio before an immediate turnaround to release.   After six months, the sisters decided to slow down in order to focus on more long term projects. They’re now using fall of 2021 to release The Conception Project - a collection of three EP’s comprised of all their previously released singles, plus one new song each, to tell a clearer story of who they are - first as individuals, and then as sisters. Their differences, similarities, dreams and struggles are made apparent in the honest narrative of their sisterhood.   Their real passion though is in connecting directly with their audience. You can find them streaming on Twitch and Pococha.   www.motherlionmusic.com