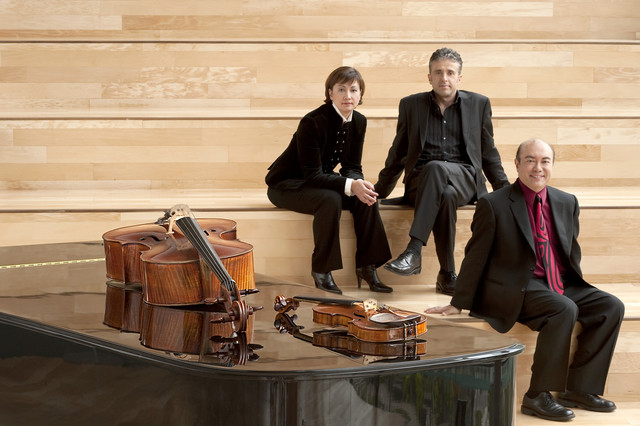 The Toronto-based Gryphon Trio is a chamber group of international renown that has scored numerous critical successes for performances in both the standard repertory (Haydn, Mozart, Beethoven, Mendelssohn, Dvorák) and in lesser-known fare, especially works by contemporary Canadian composers. The three players of the ensemble are Annalee Patipatanakoon on violin, Roman Borys on cello, and Jamie Parker on piano. By 2006, all of the group's recordings had been issued by the Canadian label Analekta. The Gryphon Trio was formed in Toronto in 1993. The name Gryphon is derived from a mythical beast -- half-eagle and half-lion -- that symbolizes a connection between cosmic and psychic powers. Two of the ensemble's players had previous experience as members of a trio: from 1985 through 1992, Patipatanakoon and Borys performed together in the Trio Lyrika. Shortly after the Gryphon's initial concerts in Canada, the ensemble launched its first international tours and immediately drew attention. In 1996 Analekta issued its first recording, simply titled The Gryphon Trio, which contained four trios by Haydn. The following year the Gryphon Trio was conferred Ensemble-in-Residence at the popular chamber music concert series Music Toronto. In 2001, Patipatanakoon and Borys became faculty members at the University of Toronto's music department, and two years later,

Parker joined them there. By that time the Gryphon players had released a string of successful recordings. They followed with two more in 2003: Beethoven's Op. 1 Trios, Nos. 1 & 3; and the group's first CD of contemporary works, called Canadian Premieres. It featured compositions by Kelly-Marie Murphy, Ka Nin Chan, Christos Hatzis, and Gary Kulesha. In 2000, the group premiered Hatzis ' multimedi piece, Constantinople, in which the trio is joined by two vocalists. Composer Hatzis wrote a quasi-operatic stage work for the Gryphon Trio, which the ensemble premiered with great success at the 2004 Banff Summer Arts Festival (Alberta). The group reprised the production the following year at the New Haven, CT-based International Festival of Arts and Ideas. In 2004, the ensemble was proclaimed Favorite Classical Artist/Group at the Canadian Independent Music Awards, and the following year received a Juno Award for Classical Album of the Year in the Solo or Chamber category for Canadian Premieres. The Gryphon Trio's recordings include a 2006 release of the two-disc set of Mozart's complete piano trios.