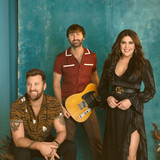 Built around rich vocal harmony, vivid emotional writing and a smooth fusion of Country, rock and pop, Lady A have long been a model of mainstream success. Their 11 No. 1s, 18 million albums sold, 34 million tracks, five billion digital streams and a global touring footprint prove the point. Known for their 9X PLATINUM hit “Need You Now,” which is the highest certified song by a Country group, they have earned CMA Awards Vocal Group of the Year trophies three years in a row and countless other honors including five GRAMMY Awards, Billboard Music Awards, People’s Choice Awards, Teen Choice Awards, a Tony Award nod and were recently inducted as members of the Grand Ole Opry. The 34-city LADY A: WHAT A SONG CAN DO TOUR will launch July 29th, with a portion of the ticket sales going towards LadyAID, the group’s philanthropic fund.