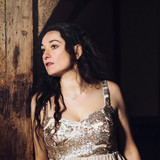 Odette Michell is an award-winning British folk singer-songwriter, guitarist and bouzouki player with a bold new take on the acoustic tradition and a voice capable of demonstrating the finer points of both folk and traditional song with genuine craftsmanship. Things have been moving at something of a pace for Odette ever since she released her 2018 debut EP 'By Way Of Night'. Her follow up debut album 'The Wildest Rose' was released to wide acclaim and garnered high praise, gaining Odette her first national and international radio plays on both BBC and Folk Radio stations. An engaging live performer, Odette has since gone on to open for folk legends Martin Carthy, Phil Beer, Reg Meuross, Boo Hewerdine, Sam Carter, Nancy Kerr and BBC R2 Folk Award Nominees Ninebarrow, amongst others.