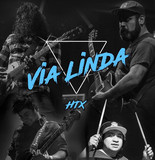 What started of as jam sessions early 2017, led to the birth of Via Linda. After months of writing, Via Linda prepared to record their first EP, Peachy Cool Arrow, which released in September 2017. Their single “The Way That You Move” started getting AirPlay in their local station Houston’s 94.5 The Buzz, 90.1 KPFT and stations in California & Ohio. Since 2019, Via Linda has released a second EP, Apollo, and has shared stages with numerous national bands such as Puddle of Mudd, 10 Years, Saving Abel, Trapt, Sons of Texas, Parabelle, & more! New single “Right At Your Face” is out now featuring N-8