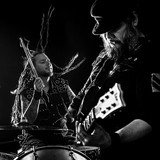 Orlando, FL's The Glorious Rebellion have been destroying stages quickly, concisely, and with intent since forming in 2014. The duo's chaotic spin on Noise Rock & Sludge features sounds reminiscent of Helmet, The Melvins, and Acid Bath, turning heads at a rapid pace. The band have been featured in such national publications as Decibel, Noisey, Metal Injection, and Metal Sucks. In 2016, the band was featured in Decibel Magazine's "Best of" issue, receiving an award for their bizarre song titles. They have also shared the stage with such bands as Ken Mode, Black Tusk, Lo Pan, Jucifer, Holly Hunt, Black Cobra, Bardus, Hollow Leg, Junior Bruce, Bloodlet, and many more. "The Glorious Rebellion is the sort of band that, were they alive and kicking back in the late 80s/early-to-mid 90s, would have been about as seriously tailor-made for a life signed to AmRep as one could imagine. Not only does the Grand Canyon-sized groove, acerbic guitar stomp and burly vocal bellow fit the musical mold, their two releases thus far are dripping with the kind of sarcastic snarkiness and no-one-could-give-fewer-fucks attitude that drew in like-minded laughing misanthropes while repelling and/or offending everyone else within earshot." - Decibel Magazine "The Glorious Rebellion's "lurching, off kilter noise rock and frazzled, sludgy riffs coalesce into a heavy, ugly, glorious mess of sound and skronk, like Acid Bath on a Jesus Lizard Trip." - Noisey