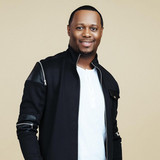 Gospel singer, songwriter, choir director, and music minister Micah Stampley was born September 7, 1971 in Los Angeles, California, although his family moved to Baton Rouge, Louisiana shortly after he was born and he grew up there. He showed a talent for music and singing early on, and was participating in his father's choir by the time he was four years old. By the age of seven he was actually directing the choir, although he had to stand on a table in order for the singers to see him. He took up the piano at the age of 13. Shortly before Stampley graduated from high school, the family moved to Natchitoches, where he finished school. Blessed with a beautiful, multi-octave voice and a flair for arranging harmonies and directing vocal ensembles, a career as both a musician and minister was decided, and crystallized when he met and married fellow gospel singer Heidi Jones in 1998. Jones became his partner in songwriting as well, and he was soon signed to evangelist T.D. Jakes' record label. Stampley went on to develop a contemporary gospel and praise style that mixed R&B, hip-hop, funk, and whatever else struck his fancy, into powerful musical statements that won him both critical accolades and an expanding fan base. His debut album, The Songbook of Micah, was released in 2005 and hit number three on the Billboard Top Gospel Albums chart, also appearing on the Top R&B/Hip-Hop Albums chart. It was followed by A Fresh Wind...The Second Sound in 2006, Ransomed in 2008, Release Me in 2010, and One Voice in 2011, all on the Music World label, and all charting in the gospel Top 15. His sixth LP, Love Never Fails, appeared in 2013 on EMI Gospel and also hit the gospel chart. Recorded at Oasis Family Life Church in Dallas, Georgia, the live album To the King...Vertical Worship followed in 2016 via Entertainment One Music. ~ Steve Leggett & Marcy Donelson, Rovi