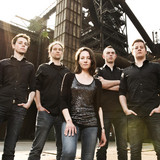 Alternative Rock from Krefeld, GER.   Conversations that never did, but should have been held and the dispute with your very own incapacitated self, which, after long endurance, is finally released by hammering guitar-walls, double-bass-busts and a vigorous voice. But also the faint doubts about decisions you made and their consequences find their spot in the spherical-dark parts of the band's tracks.   Echoes of Eris engage themselves with these issues since 2013 and tell their stories with their EP “Prologue” (which was released under their former name “Off My Diary”) on several regional festival stages like Hallabalooza or the Tönivorster Rocknacht. In summer 2018 they become part of the Aktionbühne Spezial Festival organized by locally renowned club Kulturfabrik Krefeld through a public vote. The five musicians release their debut album “Decay”

in May 2019 and were co-headlining Magnanova Festival in September this year.