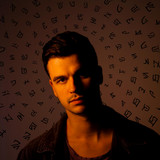 As he stared up at the stars one night, singer, songwriter, and producer Yula found inspiration to begin a new chapter in his life. His first single Emergence in August of 2019, revealed astral textures, beautifully energized arrangements, and powerful guitar riffs - all of which serve as the staple of Yula’s sound. With his songs being inspired by the infinite realm of space and our innate desire to understand the unknown, Yula’s listeners are taken into another universe