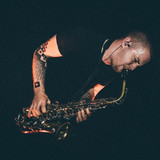 A multi-instrumentalist producer with an appetite for the absurd. Previously known as the lesser educated half of Nigel & The Dropout (a band made famous by Showtime’s “Shameless”, as well as the front pages of the infamous internet platforms: "The Pirate Bay" and "Reddit"). This high-school dropout put down the guitar and picked up an alto saxophone to paint his next chapter, collaborating with other musical residents at a repurposed church in the heart of Detroit: ‘Assemble Sound’. After leaving school at the age of 16, he taught himself to program computers to find work. Using those skills to later create musical interfaces and plugins to assist in music production, in addition to bringing his generative projection art to the live stage. Drawing inspiration from just about everything from ‘Griz’ to ‘Nine Inch Nails’, he is bringing his live production to festivals across the east coast after making a renegade premiere on the rooftop stage of Electric Forest’s legendary ‘Struggle Bus’ in 2018. (andrew@thedropout.club for booking)