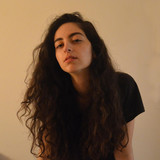 Bash Saaid is a self-taught producer, composer, singer, songwriter and multi-instrumentalist based in Aarhus, Denmark. She started producing and recording her own songs in 2018 and has just released her second single 'Maybe You Love Me'. The single was added to Spotify’s editorial Brazilian playlist ‘Hora Acústica’ and 'Verão Acústico'.   In 2019, Bash participated in the international Hit Like A Girl (HLAG) beat making contest and won the special ROLI Technology Category. The contest received hundreds of entries from more than 50 countries. Same year, her single ‘Maybe You Love Me’ was recognized and recommended by one of Denmarks biggest talent scout projects; Danish Radio’s Karrierekanonen (The Career Canon) which described it as a piece of ‘charming immediacy’. This recommendation is no small honor, as KarriereKanonen has resulted in a good number of successful acts throughout the years like The Minds Of 99, Johnny Deluxe and Rasmus Nøhr.  Currently Bash is working on her next release in her humble bedroom studio where she records, produces, mixes and masters everything herself.   You can follow Bash Saaid here on Spotify to be the first to hear her new music. You can also follow her on Instagram for behind the production material plus more, and don’t forget to say hi! :)   (Thanks for being here 🧡, just b)  Instagram: @bashiimusic