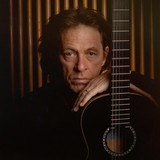 Guitarist Dominic Miller is a highly regarded pop, classical, and jazz-influenced player, best known for his long association with Sting. Born in Buenos Aires, Argentina in 1960, Miller spent his first ten years living in South America, where his father worked for Johnson Wax. Around age ten, he moved back to the United States with his family, settling in Racine, Wisconsin. By age 15 he had picked up the guitar and played in various bands during high school. Later, he studied at London's Guildhall School of Music, where he made his first forays into the U.K. music scene and befriended artists like violinist Nigel Kennedy and Level 42 keyboardist Mike Lindup. From the late '80s onward, Miller was an in-demand performer, touring and/or recording with such acts as Level 42, World Party, King Swamp, the Pretenders, Phil Collins, and many others. Beginning with 1991's The Soul Cages, Miller began a fruitful working relationship with Sting. He has appeared on almost all of Sting's albums since the '90s, including Ten Summoner's Tales, Mercury Falling, Brand New Day, All This Time, Sacred Love, If on a Winter's Night, and more. He has also made significant contributions to albums by Chris Botti, Vinnie Colaiuta, Kim Richey, Ronan Keating, LeAnn Rimes, and many others. As a solo artist, Miller debuted with First Touch in 1995, followed by Second Nature in 1999. These albums showcased his adept technique and inclination toward evocative instrumentals. He has delivered a steady stream of solo efforts since then, including 2002's New Dawn with Neil Stacey, 2004's classical-themed Shapes, and 2008's In a Dream with Peter Kater. He has also delivered a handful of eclectic efforts for the Q-Rious label, including 2010's November; 2014's Ad Hoc; and 2016's collaboration with Manolito Simonet, Hecho en Cuba. In 2017, Miller made his ECM debut with the atmospheric Silent Light. A second ECM release, Absinthe, followed in 2019. ~ Matt Collar, Rovi