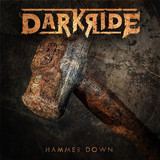 DARKRIDE combine elements of Thrash and Progressive Metal with melodic Metalcore and Power Metal. Their contemporary style mix is reminiscent of Killswitch Engage, Trivium, Nevermore and Masterplan, and is paired with fresh ideas from the Metal underground. "It's sound for Metal fans like ourselves," Dirk Gooding (guitars) points out. "Whether on stage, in the rehearsal room, or online, we just love making music together that is as diverse as all the bands we like to hear." In addition to the three band members Carsten, Kay and Dirk, DARKRIDE's debut single features prominent guest musicians, such as Dirk Verbeuren (Megadeth, ex-Soilwork) on drums and Simone Mularoni (DGM) on lead guitar. Numerous other guests will be featured on the album »Weight of the World«, such as Kevin Talley (ex-Six Feet Under) on drums and René Berthiaume (Equilibirum), who contributes orchestra and synthesizers. "Writing those riffs, recording them and finally listening to them in such a fat production is an incredibly awesome feeling, and having such guest musicians on board is hard to beat," says Kay Dommaschk (guitars). DARKRIDE's debut album »Weight of the World« was just released July 11, 2019 on Monstrosa Music … with mastering engineer Ermin Hamidovic taking care of the sound's fine tuning. He also helped Devin Townsend, Periphery and Animals as Leaders to a pristine sound. That's why metal fans have to love those eleven modern neck breaker songs, which DARKRIDE toss to the listeners.