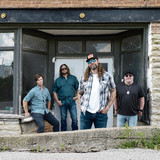 Joe Stamm Band’s newest country-rock album is as brutally authentic as the Midwestern plains and people that inspire these songs. A year-round working musician, Stamm has become something of an anthropologist of the tiny towns dotting middle America. Thanks to his fondness for this so-called flyover country, and his crew of down-home troubadours, Stamm has created the soundtrack to the heart of America: Midwest Town. Cutting his teeth playing in middle-of-nowhere dives, Stamm earned the stage presence and grit it would take to support artists like Chris Knight, Blackberry Smoke, Sunny Sweeney, Tyler Childers, Whiskey Myers, Jamey Johnson, and more. It’s the same blue-collar outlaw spirit from his early days that Stamm brings to any stage and every audience today. “There’s a sinewy, rootsy texture to his inflections, always evocative and drenched in a rock ‘n roll spirit.” -- B-Sides & Badlands Joe has honed his craft for writing the way folks speak, using specifics to relate universally, and finding happiness in the little things. Joe Stamm Band has taken those words and stories and matched them to country-rock riffs that will keep Midwest Town spinning round ‘n’ round your turntable. For more music from Joe, also search "Joe Stamm" for his solo releases.