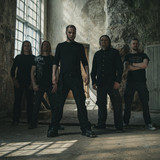 The embodiment of Finnish melancholic metal Kaunis Kuolematon is releasing their third full-length album at the end of this year. Recordings of the album are done at DeepNoise Studios, Finland (Bloodred Hourglass, Wolfheart, Dawn Of Solace, To/Die/For) and artwork will be done by Niko Anttila (Wolfheart, Sabaton etc.) The band’s music gets streamed a lot on all platforms (~20k listeners a month on Spotify, without new releases) and they have gathered a very real fan base following the bands rise. So far Kaunis Kuolematon has released two full-length albums, one EP and several singles. All the recordings of the new album are now finished and they move forward to mixing. Their latest single ‘Paha Ihminen’ released at the end of last year - giving you a taste of the material and sound coming. This single has already gathered over 90k streams on Spotify. The band’s unique and recognizable sound has expanded Doom Metal's typical borders, which has gotten them a lot of attention – the sound can go from beautiful melancholy and soft vocals into extreme driven metal and energetic screams. This makes their music appealing to a large audience from many metal subgenres. Singing in Finnish language has also given them a lot of good feedback and increased the interest and mystery of the band. So far Kaunis Kuolematon has done gigs as support act for bands like Omnium Gatherum, Wolfheart, Cult of Luna, Vorna and October Tide, as well as festivals and own headline shows all over Finland.