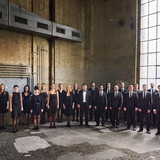 The combination of outstanding vocal work, innovative programming and a modern appearance makes the Zurich Chamber Singers, led by conductor Christian Erny, one of the most promising and interesting vocal ensembles of the young generation. With its new album O nata lux, the choir convinced critics and audiences worldwide. The vocal magazine Chorzeit calls the CD “a musical pleasure of the first order”, while the Aachener Zeitung praises the sound culture, which is “unparalleled”. “With O nata lux, the Zurich Chamber Singers finally sing their way into the top 10 of European chamber choirs,” states Image HiFi Magazine. The following seasons see the Zurich Chamber Singers perform with artists such as Ian Bostridge and Roberto Gonzales Monjas and with orchestras such as the Musikkollegium Winterthur, Cardinal Complex and the Orchestra of Europe. The remarkable diversity and flexibility of the young ensemble allows it to convince in almost every conceivable formation and style. The choir covers the repertoire from Renaissance polyphony to twentieth-century choral symphonic works. The Zurich Chamber Singers are passionate about contemporary music and the promotion of young composers. Since their foundation, they have premiered works by Patrick Brennan (NIR), Rhiannon Randle (GB) and Kevin Hartnett (USA). They also realized the world premiere recording of the work O magnum mysterium by the Norwegian composer Marcus Paus. The ZCS record exclusively for Berlin Classics.