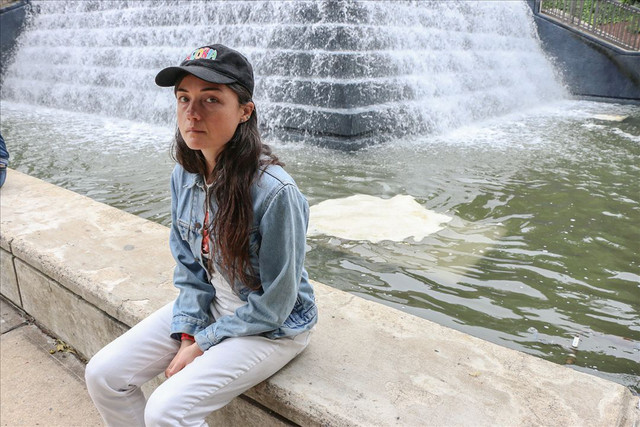 As Grouper, Liz Harris combines aspects of ambient and dream pop into ethereal, reverb-heavy music that is equally mysterious and moving. She uncovers different nuances within this approach on each of her many releases, which range from the lush and relatively poppy territory of 2008's widely acclaimed Dragging a Dead Deer Up a Hill to 2012's sprawling double-album A I A to more intimate works like 2018's Grid of Points. A resident of the Pacific Northwest, Harris was born in Northern California and grew up in a Fourth Way commune in the Bay Area. Since the community was known as "The Group," the commune's kids called themselves and their parents "groupers." It was a term that reflected Harris' identity as well as how she loosely organized the free-flowing elements in her music, and she adopted the name Grouper for her self-titled, self-released 2005 debut album. She then signed to Free Porcupine, which released Way Their Crept later that year. Harris followed it with a string of 2006 releases that included the single "He Knows," the album Wide, and Creepshow, a collaborative EP with Xiu Xiu. Grouper continued to issue music at a steady pace, and in 2007, Harris delivered the single Tried and the full-length Cover the Windows and Walls. That year, Type Records reissued Way Their Crept. The label also released 2008's Dragging a Dead Deer Up a Hill, a slightly more structured set of songs that earned Grouper widespread acclaim and became Harris' breakthrough. A string of short-form releases that included a split single with City Center and collaborations with Roy Montgomery and Xela preceded 2011's A I A, a double album that spanned the most experimental as well as the most accessible sides of Grouper's music. Another double album, 2012's Violet Replacement, showcased two expansive tape collage pieces that were created for commissioned performances in New York and Berkeley. During this time, Harris also collaborated with Tiny Vipers' Jesy Fortino as Mirrorring, who released their debut album, Foreign Body, in 2012, and with Lawrence English as Slow Walkers, whose self-titled EP arrived in 2013. That year also saw the release of The Event of Your Leaving, an album Harris recorded with Jefre Cantu-Ledesma as the duo Raum, as well as the Grouper album The Man Who Died in His Boat, a collection of songs she recorded at the same time as Dragging a Dead Deer Up a Hill. The following year saw the release of the relatively stripped-down, piano-driven Ruins, which Harris recorded during a trip to southwest Portugal in 2011. In 2015, Grouper worked with filmmaker Paul Clipson on Hypnosis Display, a film about American myth-making commissioned by Leeds Opera North. That year, Harris' noise-pop trio Helen issued its debut album The Original Faces. The singles "Paradise Valley" (2016) and "Children" (2017) preceded Grouper's 11th full-length, Grid of Points. A set of intimate songs written over the course of a week-and-a-half while Harris was on a creative retreat in Wyoming, the album was released by Kranky in April 2018. ~ Heather Phares, Rovi