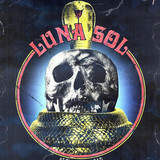 Denver’s Luna Sol est 2012. “Who says you can’t judge a book by its cover?” laughs LUNA SOL’s David Angstrom. “We wanted BELOW THE DEEP,” LUNA SOL’s sophomore album, “to look and feel like a worn out Steven King novel, with artwork that will scare children.” It might. A young woman submerged in a lake at the foothills of the Colorado Mountains is creepy. But Angstrom thrives in the darkness. He was married at the Standley Hotel in Estes Park, the haunted mansion that inspired King’s classic “The Shining.” BLOOD MOON, the band’s first album, released on 4/20 in 2015, received critical underground acclaim (e.g., in Revolver, Brooklyn Vegan, Kerrang, Marquee Magazine, Metal Sucks, Scene Magazine, Stoner Hive, Crave Online, Invisible Oranges, Rocker Stalker, Antiquiet, Spin, Pure Volume, Classic Rock and Vice Noisy). The songs focused on Angstrom’s folklore of the Colorado Mountains and included cameos and performances by friends from notable bands (Kyuss, Queens of the Stone Age, Guns n Roses, Kentucky Headhunters). With their music referred to as “high mountain stoner rock,” we wanted BELOW THE DEEP to go further. “We didn’t want to rehash the same old riffs". “On BELOW THE DEEP, we wanted to expand a bit, and touch on my Kentucky roots without leaving the fuzzy rock scene we’re proud to be a part of.” With guitar solos you can sing note for note, and the clearly troubled personal lyrics of the new album, Angstrom creates a tension we can all empathetically relate to.