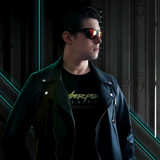 Megahit is a one-man retrowave / synthwave / outrun style music project from Hungary. Inspired by the audiovisual content of 1980s retrocomputing, he focuses on driving electronic soundscapes mixed with industrial and cyberpunk elements, with a few exceptions incorporating friendlier, Miami Vice-like feelings. In September 2017, Megahit released his first full-length conceptual album, Wrath Of The Machine, which is the first physical release in the history of the project, available on CD and cassette tapes as limited editions. The album revolves around a post-apocalyptic setting where computers have taken over the world and the remaining humans try to fight their digital enemies. Each track on the album present a building block in the history of computers - in both positive and negative aspects.The second full-length album, Not Your Action Hero has been released in April 2019. The concept album revolves around guns and various army-related themes, with a more harsh, driving atmosphere, while still incorporating a cyberpunk touch.Megahit's live performances feature audio-synced visuals in the style of 1980s computer animations, and a dynamic light show.