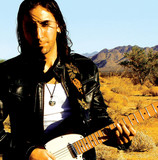 Billboard #4 hit session guitarist, and voted as a top-10 finalist by guitar legend Steve Vai in the Tonos & Ibanez Guitar Challenge, guitarist Neil Rambaldi has made quite a name for himself as both a solo artist in the styles of rock fusion, blues rock, and instrumental/progressive rock, and as a session and touring guitarist, vocalist, songwriter, arranger, and producer in many other styles spanning pop, blues, Americana, soul, classical, Latin jazz, dance, and more. Working out of both the New York-area and Los Angeles, Neil is also formerly the guitarist for Lilian Garcia (Universal Records), and has collaborated with many "greats" including Kenny Simmons of The Commodores (Motown Records), Nuno Bettencourt of Extreme (A&M Records), Stu Hamm (credits: Joe Satriani, Steve Vai), and more. For Neil's latest album, A Call To The Wild, critics have acclaimed: • “One of my favorite albums of the year. ...Terrific guitarist.” -Don Campau, KKUP 91.5 FM (Cupertino, CA, USA) • “Rambaldi is a great guitar player that can shred with lightning speed, but his emphasis is more on the melody – not just on prowess. References can be made with great Blues Rock guitarists like Joe Bonamassa, Jeff Beck or Stevie Ray Vaughan, but his playing style is quite unique... He even sings (very well)... One thing that really got me hooked... Rambaldi inserts a good number of pieces in a ‘Non Blues Rock’ style; Latin Rock, Spanish guitar... Highly recommended indeed.” -Marc Roy, ProGGnosis (USA)