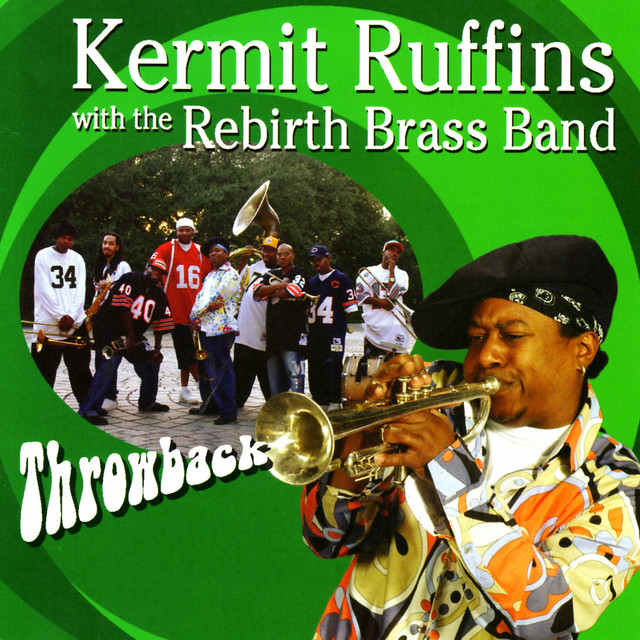 New Orleans-based trumpeter, bandleader, singer, and songwriter Kermit Ruffins is an ever-inventive musician who projects a charismatic warmth from the stage. Ruffins, born in 1964 in New Orleans, reminds many people of a sort of modern-day Louis Armstrong, though he's far from becoming the international ambassador of goodwill that Armstrong eventually became. Fortunately for fans of contemporary New Orleans music and the annual New Orleans Jazz and Heritage Festival, Ruffins, a mainstay of both arenas, was picked up and marketed and distributed by the Crescent City-based Basin Street Records, which has issued a steady stream of very well-recorded albums by Ruffins and his Barbecue Swingers. Interestingly, Ruffins was not raised in a jazz or blues-centric environment. Growing up, he listened to popular music on the radio, groups like the Commodores, Al Green, and all the groups that received airplay on radio stations in the South in the 1970s. He began playing trumpet as a young teenager, but didn't discover the possibilities of jazz and blues until, at the age of 19, he first heard Louis Armstrong. For tips with a school buddy in Jackson Square, a touristy area of New Orleans close to the Mississippi River, he began playing songs by Armstrong and other classic jazz figures associated with the Crescent City. With several of his fellow students from high school, Ruffins started the Rebirth Brass Band. That band led to Kermit Ruffins & the Barbecue Swingers in 1992. That same year, he debuted with World on a String for the Houston, Texas-based Justice Records, followed by 1993's Big Butter & Egg Man and 1995's Hold on Tight. A huge live draw in New Orleans, Ruffins attracts large audiences with his exuberant music and warm stage demeanor. He is also famous for his frequent barbecue bashes at the bars where he and his band perform. Weather permitting, he'll set up his grill on the sidewalk in front of a club and serve bar staff, bandmembers, and patrons some barbecued chicken or beef during the breaks between his usual three sets. Hence the name Barbecue Swingers. Since the late '90s, he has been a mainstay artist for the New Orleans-based Basin Street Records, delivering such well-regarded albums as 1999's Swing This!, 2001's 1533 St. Philip Street, and 2002's Big Easy. In recent years, Ruffins and his band have taken their act out on the road on summer weekends, playing at festivals in Florida, California, Colorado, New York City, and Cape May, New Jersey. In truth, Ruffins became kind of a goodwill ambassador for post-Katrina New Orleans, bridging traditional Crescent City jazz with a fresh, contemporary feel on albums like 2013's We Partyin' Traditional Style, and doing it all with both reverence and joy. In 2017, he paired with fellow New Orleans trumpeter Irvin Mayfield for Beautiful World, which marked the 20th anniversary of Basin Street Records. ~ Richard Skelly & Steve Leggett, Rovi