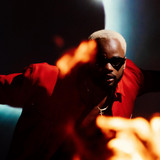 Since ‘Late Nights’ brought Carmouflage Rose to wider attention in 2017, the Zimbabwe-born artist has become a fixture on the Australian live circuit, touring with the likes of A$AP Ferg, Hayden James and Wiley, selling out headline tours, whilst quickly adapting to festival life courtesy of lucrative spots on the Spilt Milk, FOMO and Groovin’ The Moo stages. ‘Late Nights’ proved to be an industry turner, becoming ARIA-certified Gold in 2018 after amassing over 11m streams and charting in Triple J’s Top 30 Most Played Songs of 2017. Similarly, follow up single ‘Wildflowers’ amassed over 2m streams and led into the successful release of his debut EP, TASTE. Featuring these breakout singles and his lauded George Maple collaboration ‘Let Me Down’, Camo's first EP was delivered dipped in decadent production, effortless flow and fresh charm and saw him touring the UK and Europe for the first time. He followed it up with his track ‘Sele’ – a conceptualisation of the energy he felt from a trip to Zimbabwe which further cemented him as one of the most exciting artists coming from Australia. With a Q Award for Best Hip Hop/Rap Release and his best music to date dropping, 2021 is Camo’s year.