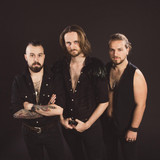 Formosa, three young men, on stage together since their school days in Southern German Province, now landed in Essen in the Ruhr area, is a band that is not ashamed of nudity. Please what? That’s right, Formosa have undressed their music, they themselves call it “Hard and Heavy”. They return to the state of nature, which is: an electric guitar, a bass, a drum set – music in loincloth so to speak. Already on the first two albums Tight & Sexy (2016) and Sorry for Being Sexy (2018) the band showed that the reduction is the biggest thing about their songs.

Drums, riffs and enough space for some unusual hooks. In this period, they played more than 200 shows with bands like Nazareth, Audrey Horne, The New Roses, Thundermother and Bonfire and went on their first bigger tour through the Balkan countries. This was their School of Rock. In the beginning of 2019, they played a support tour with the legends of Nazareth, followed by a busy festival summer. 2020 the band released their third studio album in collaboration with Metalville Records. Therefore, they barricaded themselves in a studio in Antwerp with Martin Furia (Vanderbuyst, Destruction, Nervosa) to record Danger Zone their best album so far. With the mission to revive the feeling of the 80s, which the three guys know only from legends and stories, and to transport it into the here and now!