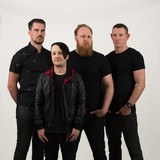 It’s been a huge couple of years for Queensland based rockers These Four Walls. Following a string of shows supporting high profile international acts such as Seether, P.O.D. Fuel, Skillet, Theory of a Deadman and Trapt, the band decided to spend the majority of 2019 completing their long awaited third studio album. When they shared this goal with their fans, the band was overwhelmed with the response, exceeding their album crowdfunding target in just 5 days. The band immediately got to work with producer and Dead Letter Circus guitarist Luke Palmer, and veteran producer/engineer Matt Bartlem to complete the project which had begun in earnest over 5 years earlier. While recording took priority, the boys stepped out of the studio during August to support Aussie icons The Butterfly Effect on their national tour, and then headlined Brisbane’s Rock Beats Depression fundraiser, before returning to the studio to put the finishing touches on the new record. With the new album in the final stages of production, These Four Walls are stoked to be sharing the first new track in over a year with their fans, with the album to follow in early 2020. Fire Away will be released on November 22nd.