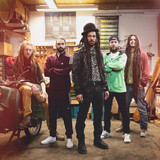 This bavarian band doesn't know any limits on stage and ignites a fire around their lead-singer Lenny Souljah, which quickly jumps over to the audience. Their sound is the spark and the audience goes up like a match. The band's distinct mix of modern Roots Reggae, diverse riddims, experimental riffs and genuine lyrics it utterly convincing. Since almost 4 years „Unlimited Culture“ has been rocking german, and international stages as well. It's time to „Get Ready“ now for the five musicians of Unlimited Culture, as the equally named album doesn't promise too much. It's like a journey through sound and different influences: You'll get from Rock to Dancehall, taking with you a grain of Soul and Gospel, without ever neglecting their roots in Roots.