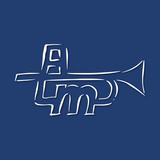 Drum- and Showband Adest Musica from Sassenheim, The Netherlands, were founded in 1952. In the beginning the association consisted of a harmony-orchestra only, later a drum- and rhythm section was added. In 1963 the harmony-orchestra was closed down. The Drum section however flourished, and 'copper' instruments such as trumpets, trombones, euphoniums and sousaphones were introduced, with the orchestra growing into its present form. The Drum- and Showband Adest Musica ranks since the eighties to the (inter)national top of drum- and showbands. That the band is regarded highly is proven not alone by the large list of requests for appearances in The Netherlands and abroad, but also by the results at tournaments. With its high level music and spectacular shows, the band always leaves an unforgettable impression with the spectators. Of course the uniforms, which are derived from the uniforms of the Dutch Royal Grenadiers, add to the impressive view as well. A uniform in a winter version with dark blue trousers and black bearskin hat and a summer uniform with white trousers and (flat) white cap. Adest Musica officially means 'there is music in it'. Very appropriate, as next to the specific repertoire of marches (the so called 'Adest Sound'), Adest Musica also has a varied concert-repertoire, with among others big band and film music. This various music styles are recorded on several CD’s. For more info; www.adestmusica.nl