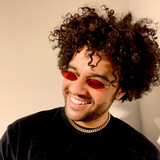 Eden Prince is a music producer from Stoke-On-Trent, UK. His unique brand of energy-infused house music features giddy rhythms buttered with soulful chord progressions that glide across a wide emotional spectrum. Classic house feelings filtered through a contemporary lens. Growing up in London, Eden’s passion for music production began as a child when he stumbled across beat-making software while looking for games on his cousin's computer. After constantly being caught sneaking into his school studios after-hours to work on hip-hop beats, Eden’s music teacher persuaded him to go to Leeds College of Music, where he honed in on his skills & developed a taste for house music. With a locker full of remixes and plenty of originals on the way, it seems he’s only just getting started. When asked about his music philosophy, Eden said “Making music for me is therapeutic & I hope that the good energy I get from it translates & reaches the listeners. It’s about the feeling & it’s about bringing people together”.