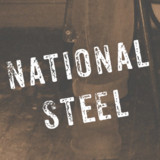 National Steel is the self-produced retro lo-fi Americana/Indie Pop recording project of songwriter and multi-instrumentalist Michael Hattem. Referred to as "cosmological freak-out Americana" by one reviewer, National Steel melds roots-rock songwriting with retro baroque and experimental pop sensibilities. Others have described the National Steel sound as having a "pop quality that hearkens back to a more carefree time where a little bit of wistfulness went a long way" and "a refreshing feeling of open-hearted, self-reliant, intelligent, reflective, old Americanism." Following the release of “Anhedonia” in 2006 and “Anomie” in 2007, the project went on a 10-year hiatus, during which Hattem pursued a doctoral degree in American history. Since then, he has released the third National Steel record, “Threnody,” which had been left on the shelf half-finished since 2009, a fourth record, “Hiraeth,” and, most recently, an EP entitled, “Anemoia.”