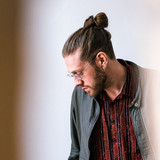 Blindsmyth, is a musical globetrotter – his live sets are a voyage of discovery between deep electronic soundscapes and experimental pop music.   His music could be described as an intense sound universe, with most of the sounds growing from acoustic roots. As a result, very organic and delicate beats mixed with his expressive vocals are combined to make up playful sound collages, which take the listener on an incredible intimate voyage. A voyage which creates space for thoughts and feelings.   After completing his composer-, music and studio production degree at the Prins Claus Conservatorium in Groningen, The Netherlands, and already having a great deal of live performance and tour experiences, Simon started to explore different music genres and techniques. As such, he started to combine his instrumental background with electronic production- and performance techniques.   Since 2014 Simon has been a freelance artist, producer, liveact, and DJ in Berlin. The project ‘Blindsmyth’ evolved from an artistic examination of his internal and external surroundings, which are the source of his inspiration and are represented in his music by numerous field recordings.   Blindsmyth is exploring sound and space in order to create something new, using his impressions and recordings. His sound spectrum ranges from impulsive and groovy to experimental and dreamy. Therefore his music cannot be labeled or limited to one niche.