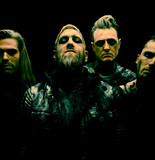 DED has been turning heads as one of rock’s most promising newcomers since the release of their 2017 debut album Mis-An-Thrope.Originating from Phoenix, AZ, DED embodies elements of rock, alternative and metal, with pop melodies, hooks and choruses, cloaked in some of the densest, most histrionic, headbanging music on the planet. But when you dig beneath the aggressive surface, DED’s unexpectedly soulful music is about bringing hope, relief and self-awareness of the things we consume and the way we act so that we can strive to be the best we can be for ourselves and others. Helmed by powerhouse rock producer Kevin Churko (Five Finger Death Punch, Ozzy Osbourne, Disturbed), the new music takes on the fury of their debut and deepens the emotions with a compassion for humanity and a thought-provoking consciousness. DED is building a community by offering comfort in times of despair, positivity by exposing negativity, and clarity through suffering. DED, who are quickly becoming one of rock’s most exciting torchbearers, blaze their own trail as they cathartically stare down various beasts - both existential and innate - proving that there’s a way to live through the struggle and come out stronger, happier, and more aware of how we look after ourselves and each other.