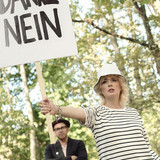 The history of KLEE begins in the second half of the 90s as RALLEY. Under this name, Suzie and Sten released two albums that actually sounded different from anything produced in Germany. They let themselves be inspired by favourite bands like Blondie, The Cure or Everything But The Girl, and meshed worldly pop sound with German lyrics. But a bad car accident put RALLEY on the brakes. A break due to injury followed and finally a new beginning: the sound became more electronic and ralley became KLEE. All five KLEE albums released so far have been chart successes, the most recent being "Aus Lauter Liebe", which climbed to number six in 2011. In addition, singles like "Gold", "Erinner dich", "Zwei Herzen", "Die Stadt", "Willst Du bei mir bleiben", "2 Fragen" or "Für alle die" were not only played on the radio, but also accompanied films and global advertising campaigns (e.g. Givenchy, DB, Aktion Mensch) and were covered by colleagues like Nena, Gunther Gabriel, Tillmann Rosmy or The Wedding Present. KLEE never sounded German, but like international euphoria. No wonder they not only went on concert tours all over Europe, but also to China and Russia, among other places, recorded English-language versions of their songs and also had the privilege to release their music in the UK and the USA. After a ten year hiatus KLEE are now back with a new album. Since the band's sound matured continuously over the years, "Trotzalledem" is by far their strongest record yet.