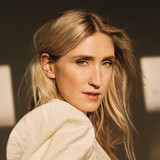 Growing up in the north, Christel started singing and performing at an early age. She grew up with her mother, sister and grandmother signing in choirs, as well as a guitar-loving father. Christel says that she has always had an urge to sing and use her voice. She started recording herself with an old tape-recorder at a young age. Christel Alsos made her debut in 2007, she was breath of fresh air in the Norwegian music scene. The talented girl from up north managed to mesmerize the audience with her distinctive voice and melancholic melodies. Since then, Christel has many achievements. Her debut album Closing The Distance sold to platinum, and she has been nominated for several Norwegian Grammys (Spellemanns prisen). You might have discovered her music through the series “Vampire Diaries” or other American featured films. Christel spend a lot of time writing and recording new music. The autumn and winter of 2020 she will finalize her sixth album which will be released early 2021. The public will get a taste of what is coming October 2. with the release of her next single “That Lonely Feeling”. Every year, Christel takes pride in putting the people in the right Christmas mood with her popular Christmas tours, and has become one of Norway’s leading communicators of Christmas music with both recorded and live music. She brings traditional songs along with her self-written songs to give you the ultimate feeling of Christmas.