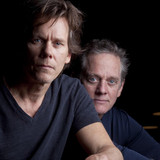 Michael and Kevin Bacon A.K.A. The Bacon Brothers, offer an ideal example of what can be accomplished when two talented siblings expand their horizons, combine their talents and create an inspired sound that stands apart wholly on its own. With a career that spans over two decades, it’s clear that their efforts aren’t simply a sideline. That’s evident once again in their landmark tenth album, The Way We Love, a series of songs that explore those intimate relationships with the people and ideals that become an ongoing source of both purpose and passion. Scheduled for release on July 17th with 7 tracks produced by the brothers, 2 by Philadelphia producer/engineer Joe Nicolo, and 1 produced by Saverio Principini, the album includes two exceptional offerings recorded live at Sony Hall in New York City. Indeed, it’s one of their most emotionally charged collections to date, and one of their most dynamic and diverse as well. “The songs are all about the things we love, the way we love music, the way we love family, the way we love our wives, the way we love the world and humanity,” Michael notes. It’s a fine fit; dedicated road warriors, the Bacons are indeed dedicated and devoted to making music that rings with affirmation and authenticity. “We’re a songwriting band,” Kevin adds. “It’s the be-all and end-all as far as what we do.” Likewise, there’s no shortage of sentiment either. That’s but one reason why The Way We Love is ultimately so endearing.