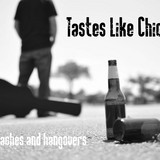 “The phrase “tastes like chicken” is commonly heard as people search for ways to describe the familiar taste of more exotic meats. And it was used originally as a joke for a local band called – you guessed it – Tastes Like Chicken when they tried to describe their sound upon formation nearly six years ago. “Because it has a familiar taste, but still, you can’t put your finger on it,” said Lance Shirley, lead singer and songwriter. “Our music is kind of like that. It’s got elements of jazz and rock and country, which makes us sound different than most. It’s really hard to put us in a genre … we kind of bend all the different genres.” With a jazzy saxophonist, a gospel drummer and a bassist who loves to jam, it is easy to see how the band is a medley of sounds. Though the group’s sound cannot be confined to any one genre, Shirley said, the band’s closest comparison is likely The Dave Matthews Band."” - Deb Swearingen, SCNOW (Jul 13, 2016)