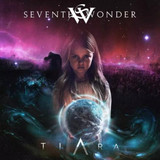 Seventh Wonder was formed in 2000 by bass player Andreas Blomqvist, guitarist Johan Liefvendahl and drummer Johnny Sandin and as keyboard player Andreas “Kyrt” Söderin joined within a year, the band was ready to go. Singer Andi Kravljaca was recruited and the up and coming band soon caught the attention of label Lion Music who signed them in 2004, spawning the release of the debut Album 'Become' in 2005, which also led to the departure of Andi. In the search for a replacement, Seventh Wonder struck gold in the brilliant talent of Tommy Karevik (ex: Vindictiv, current Kamelot). This lineup released three albums; Waiting in the WIngs (2006), Mercy Falls (2008) and the Great Escape (2010), bringing them to stages all over Europe as well as to the USA playing the ProgPower USA festival. Following the release of the Great Escape, drummer Johnny left the band for family reasons. He was replaced in the spring of 2011 by Stefan Norgren (ex: Lion´s Share), and the band played more shows in Europe, and also returning to the USA in 2014 to perform the concept album and fan favourite Mercy Falls front to back. In 2016 the aforementioned live show was released on DVD and also as a double album that also features two new studio songs. In October 2018 Seventh Wonder finally unleashed their eagerly anticipated new concept album ”Tiara”. 70 minutes of epic prog metal at its very finest for the best and most loyal fans in the world!