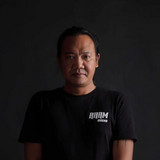 Born and raised in Bali, Agoes's dee jaying days started when he was only 17. Agoes's career has seen him take a break to develop other business interests, as well as raise a family as a stay at home dad. In the last few years he has taken to producing as well as setting up his own independent record label and moving into the Psy Trance genre, releasing his own tracks as well as playing other Psy Trance greats such as Berg, Zyce, Vini Vici, Liquid Soul, Bliss and Blastoyz. He