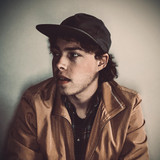 Nick Pappalardo is a multi-instrumentalist, producer, engineer, session player and songwriter, associated with the fusion- jazz genres. He is primarily noted for being a guitarist and performing in the studios with various artists from around the metro area. As a graduate from The College of Saint Rose, he has been noted for performing alongside the heavy-funk/rock group, Miss This and singer-songwriter, Sydney Schizzano. His first album, “Impressions”, which was released in early May of 2018, displays a diverse set of influences ranging from Rock to Jazz and Pop. Nick Pappalardo was born on July 8, 1995 in the small town, Glenwood, NJ. As a kid, he took guitar lessons for several years, but eventually discontinued and taught himself for many years before moving on to college. After committing to The College of Saint Rose, in Albany, NY, he then began to play shows regularly and tour the east- coast with the funk-rock group, Miss This. Nick Pappalardo is known for being one of the creative and driving forces behind the group, recording several EP’s with the band and producing a few singles which gained local radio play. Some of the popular songs from the Miss This catalogue include, “Money”, “She’s So Fine”, “Skateaway”, and “Hanky-Panky”. Nick Pappalardo made many appearances playing with his RRLG artist and singer-songwriter colleague, Sydney Schizzano, and would contribute to the release of her first album, “You Gave Me Love”.