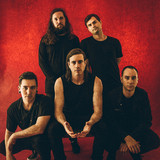 Now one of Australia’s leading heavy music acts, five piece metalcore fellowship In Hearts Wake released their debut release ‘Divination’ in 2012. They toured relentlessly, spreading their unique sound and building a fiercely loyal following along the way. They have released four powerful albums, inspiring change, with social & environmental justice and self-accountability as the core themes throughout their catalogue. Their last three albums – ‘Earthwalker’ (2014), ‘Skydancer’ (2015) and ‘Ark’ (2016) all debuted in the Top 5 of the ARIA charts, opening doors for the band around the world as they toured North America, Europe and Asia extensively, before taking 18 months off the road to restore and re-energize. They are back in full force.