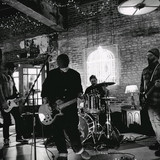 Northeast Jersey quartet The 65’s have always embraced their high stress, high anxiety, chaotic environment, allowing the steam of the concrete jungle to inform their aggressive blend of punk influenced rock & powerpop. A lean, mean sound that exudes integrity, sitting somewhere between the Replacements and New York Dolls. Comprised of Joe Pugsley (guitar, vocals), John Steele (drums), Ryan Struck (bass, backing vox) and Ed Roessler (guitar), the band has set a relentless pace of playing shows over the past decade, canvassing the Tri-State area. Their output of material has been just as steady. From 2013 to 2017, The 65’s released 3 EPs, along with a myriad of split releases and collaborations. Their new 3 song EP, Never Say Never, pushes their sound to new heights, while cementing their reputation as a fiercely independent working class band. Recorded at Homebrew Studio in Sparta NJ with producer/engineer Kevin Lacatena, the songs are sharp and concise, yet are sure to leave the listener ruminating on their meaning long after the needle is lifted. Never Say Never is due out 2/28/20 via Mint 400 Records & Pyrrhic Victory Recordings.