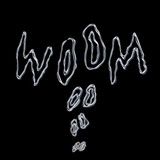 It’s quite hard to think of one word that perfectly pinpoints what WOOM do. Band sounds too, well, bandy. Choir almost does the job, but despite being almost-acapella, again doesn’t fully characterize their magic. Let's just say for now: together as WOOM, Gray, Izzy, Lara and Alice are four voices. It has already been quite a journey for the four-part concept-choir, amassing an adoring cult fanbase, including touring partners like King Krule, Whitney and The Big Moon. Their notoriety as a completely immersive, near-transcendental experience is fast becoming the stuff of indie folklore.