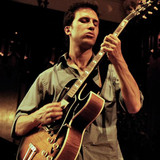 Turkish guitarist/composer Sinan Bakir is noted as a virtuoso player and a masterful composer by the music critics and his peers. Sinan's early musical journey started with mandolin lessons followed by an audition leading to the Ankara State Opera Children's Choir. After attending a rock concert in his early teen years he was inspired to pick up his first guitar and started taking private lessons, spending most of his time practicing and studying music. Soon after he formed his first band and started playing gigs around the city while attending to college in his hometown Ankara. By the time he graduated from Hacettepe University with a degree in engineering he was granted a scholarship from the Hartford Conservatory and moved to United States. In his new found home the guitarist kept writing tunes, attending sessions,and playing regular gigs & music festivals. His all original debut album "On My Way" (2009) with bassist Thomson Kneeland and drummer Mark Ferber, followed by a quartet recording titled “Tales and Stories”(2012) with pianist Warren Byrd. Both albums received great reviews from many respected music publications and featured in a variety of Radio and TV programs. While maintaining a busy teaching schedule guitarist continues to perform in diverse settings from solo recitals to trio concerts as well as many other musical situations.