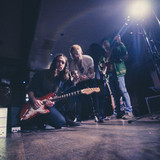 The Scared Crows was formed in 2018 in North Hollywood, CA. The Scared Crows is a collective and ongoing collaboration between musicians, artists, and fans. The band is known for their satirical and cynical approach to songwriting, often poking fun at popular culture. The Scared Crows debuted live at the legendary Rainbow Bar & Grill where they continue to play shows regularly.

The band was discovered by a music community titled The JamNation, who hosts monthly jam sessions at legendary spots, Rainbow Bar & Grill and Universal Bar & Grill. Through the jam space at the Rainbow, The Scared Crows found each other, which quickly led to playing shows and recording lots of songs. The band was recently included on the soundtrack for Millenium Films's 'Search And Destroy'. The band currently has two completed bodies of work. The first EP, 'Electric Suicide', is a short a sweet collection of fresh rock songs, sarcastic and cynical in theme. The second release is currently announced, but unreleased. It is a full length album titled 'Songs To Get Down To', which the band claims is their best work.