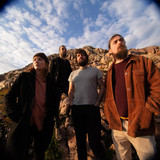 Dublin four-piece Lankum (brothers Ian and Daragh Lynch, Cormac MacDiarmada and Radie Peat) have gained worldwide acclaim for their first two albums and captivating, often euphoric live performances. Their third album, The Livelong Day, recorded and produced by John ‘Spud’ Murphy in the Meadow and Guerrilla Sounds studio (with additional help from Robert ‘Scanny’ Watson and mastered by Harvey Birrell) successfully blends alternative folk and psychedelia. It takes both the earthly and alien elements of their sound to create an immersive, otherworldly sonic landscape. Lankum are the type of band you never knew you were searching for. A group of individuals united by a gang mentality whose close vocal harmonies, instrumental interplay and dramatic storytelling pin you to the seat and revive the spirit. They show that folk music can be angry, progressive and is still a vital force today. Their latest album ‘The Livelong Day’ is released on Rough Trade Records October 25th.