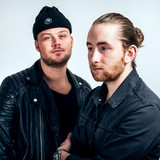 Swedz is the creation of DJ/Producer duo Lucas Börjesson and Emil Johansson. The pair, who are already receiving praise online, are working hard to be the next big act to emerge from Sweden’s talented EDM community. Meeting in high school, the duo began recording under the Swedz name and signed a 3 year publishing deal with the Canadian publishing house Premier Muzik International in 2018. A year later, TGR Music Group/Sony Music picked up a collaboration with fellow Swede Klave, and Money became Swedz’ first release through a major label. 2020 looks to set to be an exciting year for the duo, with two singles released already through Harmor Records and Sony Music Sweden.