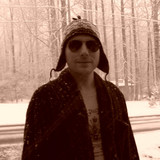 Night's Bright Colors’ first cries of life came about in typically schizophrenic fashion—a pair of EPs in 2002, one recorded in a studio with a full band, and another collection of quieter songs recorded at home on 4-track.The project was founded by Jason Smith, a songwriter and multi-instrumentalist from Asheville, NC who grew up enjoying the usual suspects but quickly created his own unique vibe: sensitive and sharp, quieter than most, capable of deeply melodic incisions into our etherized collective unconscious. The band’s early focus was spent writing and refining songs for an extensive concept series of four albums that depicted the passing of a single night in a hospital. The quartet features traditional song structures alongside more experimental elements and a varied palette of instrumentation courtesy of the many musical guests that have contributed throughout the series. Originally modeled on classical form, with themes and textures referenced throughout, the series is a vast exploration into the nature of redemption. The lyrics use wordplay and shifting perspectives to depict a fictitious protagonist’s struggles with memories, loss, dreams/hallucinations, and the trauma of experience, both real and imagined. Early Light and Fin And Pier, the two most recent albums, return to a more traditional pop direction, albeit with Smith’s typical brain-burrowing melodies featured in every track.